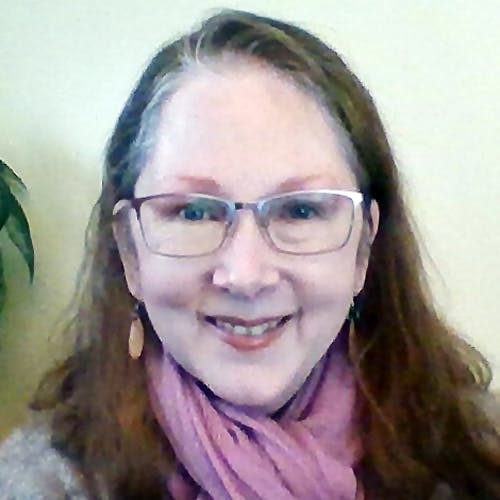 “My approach focuses on warmth, respect, and the strengths of the person with whom I am working.”

Licensed In
Therapists are legally required to obtain licenses in individual states in order to practice there. That’s why your location matters when we match you.

My approach focuses on warmth, respect, and the strengths of the person with whom I am working. What matters to me is helping people find the resources they need to make the changes they want to see in their lives, starting from the inside. I work from a trauma-informed consciousness, supported by awareness of the effects of toxic stress on the body and nervous system.

In my experience, many people live with unresolved grief and trauma. This can create a sense of stuckness in life, that in many cases may be rooted in the nervous system. I work with each client to create a distinctive approach to healing that addresses growth from a whole-person perspective.

Each person's situation is unique. By exploring the influences and experiences affecting your life we can work together to discern the path forward that feels best for you.

What are your interests outside of work?

I spend as much time outside as possible, drawing, painting, felting, knitting, and grounding my sense of purpose in family and friends.

What is one thing you do daily that supports your mental and emotional well-being?

I play with my dogs.

What book have you read more than once?

Winter's Tale by Mark Helprin. There are pages and passages in this book that I have wanted to devote week-long meditation retreats to, but I have yet to accomplish this. I find the hefty chunk of illumination brought by this book to be timeless, profound, and impossibly challenging yet comforting in the style of an Old World fairy tale. I will probably read the book every few years for the rest of my life.

The Hawthorne Valley Association in the Hudson Valley supports real initiatives, such as biodynamic farming, Waldorf education, and sustainability-focused programming for young adults, on the ground every day.

How do you recharge?

I sleep, exercise, talk with my sons, and meditate.

Do you have any pets?

I have multitudinous pets. More specifically, I have 2 dogs and 3 cats. There are more if you count the 13 ducks and 12 chickens.

My favorite pet story has to do with our cat Whizzy (short for Whizzer - long story - or "The Wizard"). When we were moving from Portland, Oregon, to Taos, New Mexico, years ago, we stopped for the night in a small town in rural Oregon. When the pet carrier containing this cat was being carried into the hotel for the night, the bottom half of it broke loose and fell off. Whizzy scurried off into the darkness of the night. Distraught, our family called for him frantically, and began to look everywhere. This continued through most of the night. Over the next two days, we looked everywhere, talked to everyone, called every shelter in the area, and strained every human faculty at our disposal to its maximum to find some way of finding him. Three days and many tears later, we sadly and defeatedly came to the conclusion that having done everything humanly possible, we may be at a dead end. We couldn't find him, no one had seen him, and our hearts were broken.

Then grandma (who was helping us drive one of the moving trucks) had one last idea: "Maybe we could put an ad in the paper." Defeatedly, and primarily out of kindness for her thoughtfulness, we considered this admittedly lame option.

My husband found the number of the local newspaper. The newspaper's office was located on the other side of town, across two major highways. He told the woman who answered that he wanted to place an ad about a lost cat. There was a pause, and the woman on the other end of the line sad, "What does it look like?". My husband described the cat. Again, a pause. The woman said, "There was a cat that looked like that here this morning. He walked right in the open door and sat down in a ray of sun by a potted plant. We thought about keeping him, but then someone thought we should take him to the vet to get checked out."

Nearly speechless, my husband hung up, found the number for the local vet the woman had mentioned, and called. "Yes, here's here" said the vet, describing our cat in the minutest detail. "He's in great shape! A little tired, but ready to go home.".

We went to the vet. Sure enough, it was our cat, looking cooly up from his comfortable resting place in a sunny spot in the vet's office as if nothing had ever happened, while all of the humans came unglued with relief, jubilence, and celebratory joy.

Somehow this cat had found his way across no less than 7 miles of unknown terrain, over two major high-traffic highways, through the infrastructure of a small city, to walk casually through the front door of the newspaper office - the only one in town - and sat down in the sunshine by a potted plant. Evidently waiting for us to call.

That was the day Whizzer became The Wizard, and thus he has been ever since.

Sign up to receive Octave updates and information about mental health topics.

If you or someone you know is experiencing an emergency or crisis and needs immediate help, call 911 or go to the nearest emergency room. Additional crisis resources can be found here.